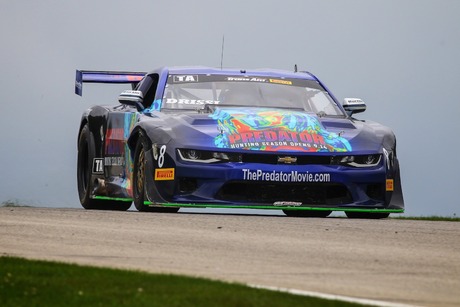 “Man, these guys worked hard,” said Tomy of his Burtin Racing crew. ”These guys pulled all nighters making sure The Predator Camaro would be ready for Saturday’s race. Given the motor issues teams were having, we decided on a strategy of driving steady and bringing the car home in one piece. I mean, you could see everyone blowing motors throughout the race… we wanted to stay in the hunt and be there at the end. We got as high as fourth, but got shuffled back to sixth. I may have errored on the side of caution, keeping the revs low, shifting early… I wanted to last just didn’t want push it. I felt bad for my teammate Loshak… he had a strong run early in the race. Happy for Boris and the Weaver crew. They did a great job. I’m confident we had a podium car, but given the conditions and the week we had, I’m happy with our result!”
“We had a great time with The Predator movie on the car” added Tomy… “it looked great and fans loved it. We’ll go hunting again at Watkins Glen.”
“Thanks to Claudio and all the Burtin guys for their hard work,” said Tomy. “They’re a great crew and a joy to be around.”

The Trans Am Series presented by Pirelli will return to action at Watkins Glen International, September 7th through 9th.

Trans Am was joined at Road America by the NASCAR Xfinity Series holding the Johnsonville 180 and Speed Energy Stadium Super Tracks.

Fans can keep up with the Trans Am Series presented by Pirelli throughout the event at www.gotransam.com, on Facebook at www.facebook.com/gotransam and on Twitter at @gotransam.

PREDATOR
Opens September 14, 2018. From the outer reaches of space to the small-town streets of suburbia, the hunt comes home. The universe’s most lethal hunters are stronger, smarter and deadlier than ever before, having genetically upgraded themselves with DNA from other species. When a boy accidentally triggers their return to Earth, only a ragtag crew of ex-soldiers and a disgruntled science teacher can prevent the end of the human race.
About The Trans Am Series presented by Pirelli:
The Trans Am Series presented by Pirelli began igniting the passion of motorsports fans across the world in 1966 and has been home to some of the greatest names in road racing. Today, Trans Am continues to honor its legacy, while challenging the status quo in racing, through meaningful racing platforms and a driver-oriented focus. The Trans Am Series is operated by The Trans Am Race Company, LLC (TARC), and oversees the management and marketing of the Trans Am Series, presented by Pirelli. SCCA Pro Racing sanctions Trans Am events and provides operations services to the Series. For more on the Series visit www.gotransam.com, “like” Trans Am on Facebook at www.facebook.com/gotransam, or follow Trans Am on Twitter @gotransam
About GoShare
GoShare’s Mission is to make the delivery of big-box items as easy and convenient as a click away from the purchase transaction. GoShare’s Vision is to own the last-mile delivery of big-box items utilizing the largest network of trucks and vans in the world. As consumers demand faster delivery for their products, retailers and wholesalers must adapt and deliver products like never before. The dedicated team at GoShare has been working diligently these past three years to develop modern transportation solutions for businesses which sell bulky items including furniture, mattresses, appliances, electronics, and more. GoShare has successfully created a platform to seamlessly connect truck & van owners with retailers who need help with the cumbersome and ungrateful task of delivering goods from store to home, “The last mile.”
Keep up with Tomy at http://www.tomydrissi.com or on Facebook at https://www.facebook.com/tomydrissi/ – Catch Tomy’s Twitter feed at https://twitter.com/tomydrissi
Tomy Drissi is an American driver and Trans Am Champion.
His driver experience includes ALMS, Trans-Am, NASCAR and Speed World Challengea
Born December 9 in Hollywood, California, Tomy owns an advertising firm that produces upcoming film displays for cinemas.
Drissi’s first racing experience in motorsports was street racing on Mulholland Drive in the Hollywood Hills.
Tomy’s professional racing career highlights include:
• 1999 Trans-Am Rookie of the Year,
• 2000 Trans-Am BBS Most Improved Driver,
• 2000 Trans-Am Crew of the Year
• 2000 Trans-Am Long Beach Champion
• 2009 Trans-Am Champion.
• 2010 ALMS (one off race) Prototype LMP1 3rd. at Mid Ohio
• 2011 saw Tomy’s return to the American Le Mans LMPC division. He scored a 2nd at Long Beach, 3rd at Lime Rock, 1st at Mid Ohio,1st at Inaugural Baltimore Grand Prix and second at Road Atlanta -Petit Le Mans.
• 2012, Drissi teamed with Bruno Junqiera for finishing 2nd at Laguna Seca, a win at Mosport (Canadian Tire Motorsports Park), 2nd at Baltimore and second at the season finale, Petit Lemans.
• 2013 NASCAR CUP/Nationwide. Best result at Mid Ohio starting 38th and finishing 19th.
• 2014 IMSA LMPC at Daytona 3rd.
• 2014 NASCAR CUP/Nationwide. Finished 19th at The Glen
• 2015 TUDOR Series. 2nd Place Rolex 24 at Daytona
• 2016 WeatherTech Series. 2nd Place Rolex 24 at Daytona
• 2017 Three wins in the Trans Am Series
• 2017 WeatherTech Series. 1st Place Motul Petit Le Mans at Road Atlanta
• 2018 Trans Am Series West Champion