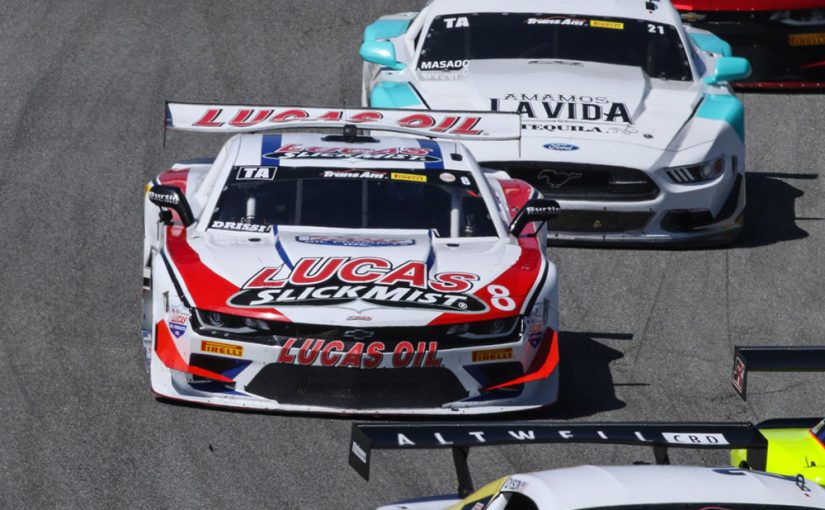 MONTEREY, CA (2 May 2021) – Tomy Drissi won his sixth race in two decades in the Trans Am Series presented by Pirelli round at WeatherTech Raceway Laguna Seca on Sunday. 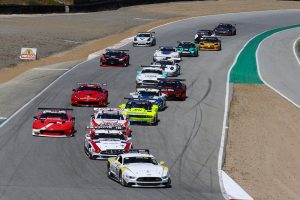 Boris Said crossed the line in first after making an aggressive move to get by Chris Dyson in Turn 1 on a restart with 10 laps remaining. The contact tore off the left-rear valve stem on Dyson’s dominant No. 20 ALTWELL CBD Ford Mustang, sending him to the pits for a new tire.

The pass went to Stewards’ review post-race, and the penalty issued for that move and additional contact with Drissi early left Said with a 40-second penalty, shuffling him back to a fifth-overall, fourth in class. Said intends to protest, leaving the results provisional.

“I didn’t want to win the race like this, but I’ve had my times where the same thing has happened to me, so I will take it,” said Drissi. “It was such a battle out there today, we recovered from a mid-race spin, and I am just so happy for the whole Burtin Racing team and Lucas Oil Slick Mist to get our first victory of the season. Thank you for the support from the series, from all my friends and family who made the trip from L.A. to watch the race, to my team and my sponsors for making this possible.”

Drissi pulled double duty this weekend, competing earlier in the day in the Historic Trans Am race with SVRA. Drissi won in the same original factory Jim Hall Chaparral 1970 Trans Am Chevy Camaro that was raced by both Jim Hall and Vic Elford in the early 70s. Elford took home a win at Watkins Glen that season driving the Camaro.

“The win in Trans Am today was a bonus,” Drissi continued. “We won the Historic Trans Am race earlier today. We are raising awareness for Vic’s ongoing health issues and I know he was riding along with me in both cars today. Fans can donated to the cause by visiting the GoFundMe page set up by Brian Redman.” 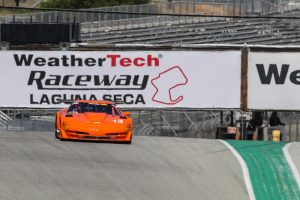 TA newcomer and 2020 XGT champion Ken Thwaits completed a double-duty weekend by placing third in class, and fourth overall in TA driving the No. 5 Franklin Road Apparel Chevrolet Camaro, and also winning the Masters class. Thwaits was also the Masters winner in Saturday’s TA2® event – his debut in the series.

Dyson came back from his pit-lane restart to cross the line in seventh after leading the opening 35 laps. He was later promoted to sixth overall, and fifth in class.

“I am not going to comment on the restart, but I can tell you we were thrilled to have ALTWELL car up front all weekend,” said Dyson following the race. “We were dominating today and I had the race in my hand. I am just really proud of our guys. I think we put on two spectacular weekends out here on the West Coast. I’m sure we had the measure of everyone out there today.”

After chasing Dyson for 14 laps, Francis’ No. 98 Future Star Racing Ford Mustang suddenly slowed and the defending seven-time champion limped to the pits.

“We were having a good run and the car was really quick,” Francis said. “We were just keeping the pressure on Chris. Waiting for an opportunity to get by. Coming out of the last turn, something broke in the rear end. I’m not sure what, but I can’t fix it right now, so we’re out of the race.”

Simon Gregg finished the race in third, driving No. 59 The Peter Gregg Foundation Chevrolet Camaro, but was issued a 40-second penalty after making race-ending contact with Amy Ruman.

Masaood crossed the line fourth overall but was promoted to second following the series of penalties issued to Said, Gregg and Marks. The result marks Masaood’s second runner-up finish in two weekends. The CD Racing driver finished second behind his teammate Dyson at Sonoma the weekend before in the West Coast race. 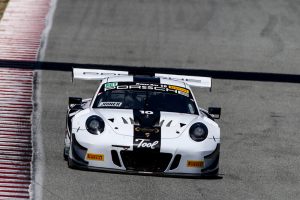 The first caution – including a brief red flag – came after Lou Gigliotti’s No. 28 G2 Motorsports Corvette went up in smoke on lap 19, sending Gigliotti into the Turn 4 gravel trap. Gigliotti, who was running second in SGT, was unhurt in the incident. Dyson pulled away on the restart, while Said had slight contact with Drissi while fighting for second.

A major turning point came on lap 33 of 45, when David Pintaric was tapped by Justin Marks at the top of the Corkscrew, sending both cars spinning to a stop. Pintaric, looking for his second-straight fourth-place finish in the No. 57 Kryderacing Ford Mustang, was done for the day. Marks lost two laps in the No. 99 Ave Motorsports Corvette and was issued a 40-second penalty for the incident to slot him into a 10th overall finish, seventh in class. The incident brought out the second caution and bunched the field for the climactic final restart.

Joiner became the first XGT winner in National competition in 2021, placing third overall in the No. 10 Good Boy Bob Coffee Roaster Porsche 991 GT3 R. It was his fourth victory in six National races over the past two seasons. Joiner came out a double winner, also scoring the West Coast Championship victory.

“I have to say it was a really fun race,” said Joiner. “It’s fun to bring a GT car with 400hp out here and play on a tight track with TA cars. I got to test my skills in another way. It was a big weekend for us and Good Boy Bob Coffee.” 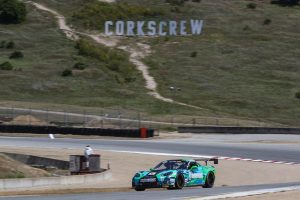 In his Trans Am debut, Mike Weathers finished second in the West Coast XGT class in the No. 48 GSpeed Chevrolet Corvette. Weathers GSpeed team built the car in two weeks so Weathers could make his first race competition at Laguna Seca.

SGT saw Justin Oakes win for the third time in four races since the 2020 finale doubleheader at Road Atlanta, driving the No. 11 Droneworks Corvette. The class battle went all the way to the checkered flag, with Oakes holding off West Coast SGT rookie Rob Crocker by 2.065-seconds.

Oakes keeping cool under considerable pressure earned him the ChillOut Moment of the Race.

“I feel so fortunate to be able to come out with my team who built this incredible car, we just keep dominating, and I love it,” said Oakes. “I love this track. It’s our first time here. I can’t wait to come back. I am going to race here every chance I get. I’m really bummed about Lou [Gigliotti], wish we could have battled it out a bit more, but I am sure he’s going to come knocking soon.”

Crocker was the West Coast Championship SGT winner, despite having to make a pit stop in the No. 77 KRYPTAURI Cybersecurity Porsche Cayman. He needed a rare pit for fuel during the opening caution, due to not having a large enough fuel cell for a 100-mile race. Also during the caution, the No. 00 Superior Builders Holden Commodor stopped and needed a tow. With Rudy Revak’s No. 60 Racecars Chevrolet Monte Carlo also on the sidelines, opened the door for Crocker’s victory. 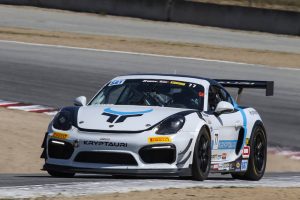 “We are running the stock sized fuel pump in this Cayman,” explained Crocker on his untraditional Trans Am pit stop. “It’s only 16.5 gallons, and this thing devours fuel, not like a six cylinder but more like an eight cylinder. We got lucky at Sonoma with the weather, we didn’t really have to be on throttle a lot and we could take a higher gear. But, unfortunately here, there was just no way around it if I wanted to keep competitive pace. We pulled in, got the fuel into the car during the first yellow we took the opportunity, got all squared back out and tried to push as hard as we could, but the grip was just not there for us at the end.”

Steve Goldman celebrated his first Trans Am finish by winning West Coast Championship honors with a 12th-place overall finish in the No. 13 LIG Racing Corvette. Goldman is an experienced SVRA driver and decided to make the transition into Trans Am last year in Portland.

Next up for the Trans Am Series presented by Pirelli is Lime Rock Park’s traditional Memorial Day weekend. The TA/XGT/SGT/GT divisions will practice and qualify on Friday, May 28, and will race at 1:20 p.m. on Saturday. The next TA2 ® race will be on Monday at 1:15 p.m. ET.

The West Coast Championship will have one weekend off before returning to action at Thunderhill Raceway Park May 14-16.

*Report based on Revised Provisional Results