Drissi Roars Back With Podium Finish At The Glen 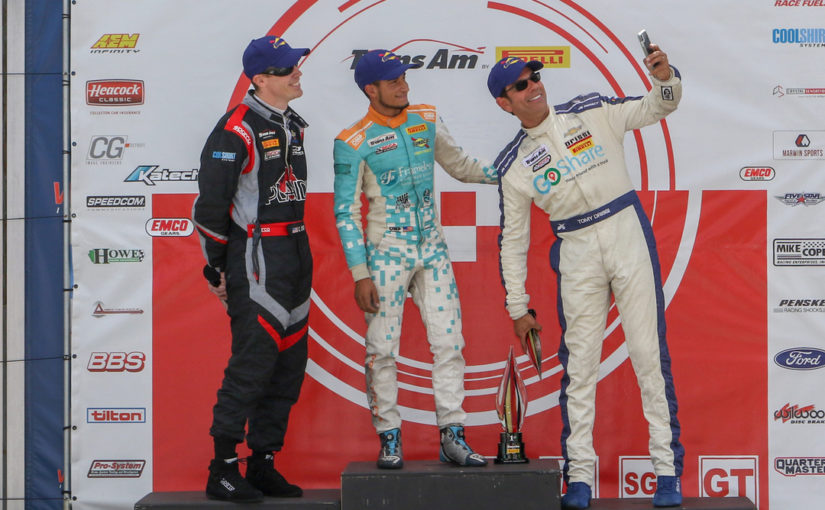 Los Angeles, CA. – September 9, 2019 – Tomy ‘The Rockin’ Moroccan’ Drissi wasted no time at all getting back amongst the leaders on his return to Trans Am competition this weekend as he notched his third podium finish of the season at the legendary Watkins Glen International. In a valiant bid to repeat his Trans Am win at the track in 2018, Drissi finished third after 30 laps racing at the upstate New York circuit, less than half a second behind rival Chris Dyson.

Drissi, the 2009 Trans Am Champion, had been sidelined for several weeks with a calf injury prior to The Glen, but he showed no signs of ring rustiness in practice. The No. 8 Lucas Oil Slick Mist Chevrolet Camaro had the power and pace to match the fabulous livery right from the first practice, with Drissi third fastest with a 1:47:208.

In qualifying on Saturday afternoon, Drissi maintained his excellent record for the season of starting no further back than the second row of the grid, registering a best time of 1:47:050 on the second of his qualifying laps.

The race itself saw Drissi quickly move up to P3, from where the Angeleno pilot kept up relentless pressure on second placed Chris Dyson for the entire race. Drissi crossed the finish line just 0.424 seconds behind the Mustang driver, clocking a fastest lap of 1:47:602 on lap 24.

Speaking after the race, Tomy was quick to thank the team behind his great performance on the track, “Thank you so much to Lucas Oil. The Slick Mist car was really fast this weekend. We were competitive in all the sessions, however, I did make a mistake in qualifying, when I messed up a corner.”

Of the race itself, he added, “I got a good start at the beginning of the race. Although these cars do not have any driving aids we do depend on the little bit of aero – having clean air makes a big difference. I was following Dyson very close nose-to-tail and he didn’t make any mistakes. It was too risky to get a pass by on him. I think it softened me up playing basketball with his son Nick in the morning! He’s a great kid.”

Drissi was magnanimous as he congratulated Ernie Francis on his win, “Congrats to Ernie. He had a great race today. The fans were awesome and the spectator turn out was huge this weekend. We didn’t repeat the win from last year but we are on to the next race now and thanks Burtin Racing – the car was so good! If we had clean air in the race the car would have been a bit faster.”

Trans Am is returning to CBS Sports in the fall. The coverage will highlight events from the season with a focus on the races at Mid Ohio and Road America with a season review episode finale, “I wish this race would have been televised – great battles today!”

Trans Am returns to our screens September 15th at 5:00 p.m. on the CBS Sports Network. Next up on the track for Drissi and Trans Am is a trip to the Virginia International Raceway September 20 to 22. After such a fine comeback, we can expect another high performance drive from Tomy.