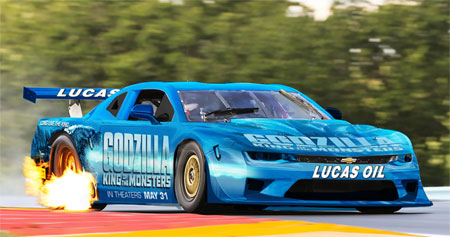 Hollywood, CA – May 20, 2019 – After the opening three rounds of the 2019 Trans Am Presented by Pirelli season, Burtin Racing pilot Tomy Drissi sits proudly in second place in the driver’s championship with two front row starts and two podium finishes to his name. It’s a strong start to the season’s scoreboard for the Hollywood driver and the man dubbed ‘The Rockin’ Moroccan’ is gearing up for a major assault on the title he won in 2009.

New on Tomy’s car at Lime Rock will be Lucas Oil as an exciting new partner to join Drissi’s program this season. Founded in 1989 by former trucker Forrest Lucas and his wife Charlotte, Lucas Oil is one of the American success stories of the twenty-first century as they have grown to become one of the leading suppliers of lubricants to the automotive sector. Their involvement in motorsports already includes NASCAR, INDYCAR and NHRA among many others and Tomy is understandably thrilled to add Trans Am and his car to that illustrious list. Lucas Oil will be on the wing and the front nose of the No. 8 Chevrolet Camaro.

Tomy gets the opportunity to close the gap on championship leader and Burtin Racing teammate Lawrence Loshak at the Memorial Day Motorsports Festival at Lime Rock Park in Lakeville, Connecticut, May 27. The 100-mile TA race is the centerpiece of racing on this coming Memorial Monday holiday. The TA class cars have got a lot more powerful and faster in the years since TA was last at the New England circuit and Drissi’s No. 8 Burtin Racing Godzilla ‘King of the Monsters’ Chevrolet Camaro is no exception, so it will be fascinating for race goers to see how the 850+bhp racers take to the tight track.

Drissi spoke this weekend with regards to heading up to Lime Rock Park, “Looking forward to going into Lime Rock and racing on Memorial Day weekend. The crowd is huge and the fans are very big on racing up there, I call this track the bullring. It is the Bristol of road course racing – it is so tight and small. There are a lot of corners and you are always moving – this track was built back in the day for small American and import model cars like MGs and Datsuns…and some of the greatest racing has taken place at Lime Rock over the years. The track hasn’t got any bigger but the cars and power of the TA machines have! Everytime I come up to Lime Rock I can’t help but to be reminded of Paul Newman – this was his track.”

After wowing the crowds with the dazzling Godzilla ‘King of the Monsters’ movie wrap at Laguna Seca, this time it’s the turn of East Coast fans to see the fantastic livery while Drissi also has a new sponsor on the car. Lucas Oil is one of the great names in recent American motorsports and Drissi was naturally thrilled to have them as a partner when he revealed the news this week, “We will be sporting Godzilla on the car and so excited to have the Lucas Oil family and company joining the 2019 program and our championship TA campaign. We have found the performance match already on par with Lucas Oil running in our ECR Engines. The power and reliability this year with our ECR program is championship caliber. I’m very proud to be on the Burtin Racing team. They never stop and they are always working hard to improve each round. Special thanks to Claudio the team boss!”

Trans Am star Drissi was also interviewed by Kurt Hansen on ESPN Race Central Media last week where he reiterated the hugely competitive nature of Trans Am, “I just made a couple year deal with Burtin Racing and we’re shooting for the TA championship. There’s so many things involved in racing and competing at this level. It is a true sport, not a game! It’s a tough deal trying to be the best out there.”

The Godzilla promotion on the car is becoming increasingly timely with the action in movie theaters getting underway May 31 when the $200M blockbuster Godzilla ‘King of the Monsters’ opens. Set become one of the biggest box office hits of all time, the film follows the heroic efforts of the crypto-zoological agency Monarch as its members face off against a battery of god-sized monsters, including the mighty Godzilla, who collides with Mothra, Rodan, and his ultimate nemesis, the three-headed King Ghidorah. When these ancient super-species—thought to be mere myths—rise again, they all vie for supremacy, leaving humanity’s very existence hanging in the balance.

Watch the Godzilla ‘King of the Monsters’ trailer, in theaters May 31, click here!

About The Trans Am Series presented by Pirelli:

Forrest and Charlotte started Lucas Oil Products with the simple philosophy of producing only the best line of lubricants and additives available anywhere. Since its inception, Lucas has steadfastly adhered to this corporate objective. Through innovative product research and development, along with aggressive marketing programs, Lucas has established itself as a top selling additive line in the American truck stop industry.

Lucas is also one of the fastest growing additive lines in the consumer automotive industry. A premium line of oils, greases and problem solving additives has helped to firmly establish Lucas as a prominent figure in this marketplace.

Lucas has long been directly involved in the American racing industry through multiple vehicle sponsorships and racing event promotions, at all levels. Seeing a need for better lubricants in this industry, the Lucas people went to work again. The end result being a line of high performance engine oils and gear oils that are second-to-none in the racing industry.

The Lucas success story has been built upon hard work, an unparalleled line of premium products and an unwavering commitment to customer satisfaction. This single formula for success will continue to guide Lucas Oil Products as it grows in the years to come.