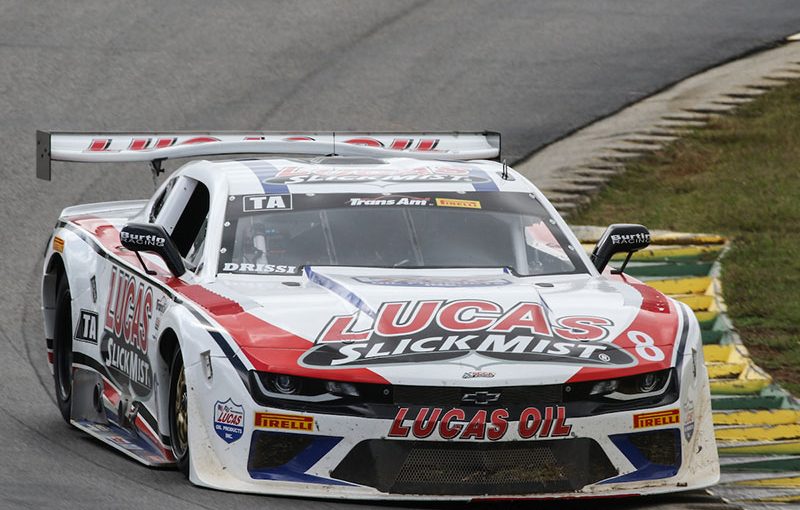 Watkins Glen, NY (September 19, 2021) – Lucas Oil SlickMist Championship driver, Tomy Drissi, saw both highs and lows at the double header weekend for the 2021 Trans Am Presented by Pirelli Championship at Watkins Glen. Drissi, being second in points, was optimistic going into the weekend and took the top step on the podium after winning the Saturday race despite some post-race infractions which ultimately altered the standings. The former Champion started the Sunday race in third place where Drissi battled with Boris Said, Ernie Francis Jr, Guy Smith and Chris Dyson only to end the race with a mechanical issue that sent the car spinning down the back straight.

“We had a team and car to win both races this weekend, but we were delt some bad hands. I’m still not sure if we collected something on track that punctured a tire or not, but Pirelli makes a fast and reliable tire and the Burtin Racing crew made the Lucas SlickMist Camaro wicked fast., Drissi said. “We have a lot of racing left in this season and I can’t thank everyone at Burtin Racing and Lucas SlickMist for all the support to make this happen.”

Heading into Round 10 at VIR, Drissi is one of the top contenders for the 2021 championship. You can follow Tomy Drissi and Lucas Oil SlickMist on September 26th by downloading the Trans Am Presented by Pirelli app in the Apple AppStore or Google Play Store or by following Tomy Drissi on his social media on the links below.