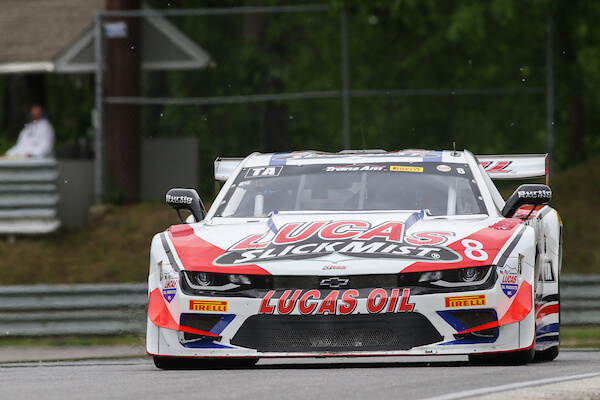 Lakeville, CT (June 4, 2021) – After a wet and wild qualifying and race at Lime Rock Park, Lucas Oil SlickMist driver Tomy Drissi drove the Burton Racing Camaro to a second place podium finish and better securing his position in the 2021 Trans Am Presented by Pirelli Championship. The Trans Am Champion now sits in second place.

“It was so great going back to Lime Rock after we had to skip it in 2020. It’s such a beautiful track and having the fans back was incredible.” said Drissi “I don’t think anyone could have touched Dyson at his home track, even in the wet. I can’t thank Lucas Oil Slick Mist, Burton Racing and the people at Lime Rock for such a great weekend. I can’t wait to go back next year.”

Heading into Round 5 at Mid-Ohio, Drissi is just 12 points off the leader for the 2021 championship. You can follow Tomy Drissi and Lucas Oil SlickMist on June 27, 2021 by downloading the Trans Am Presented by Pirelli app in the Apple AppStore or Google Play Store or, by following Tomy Drissi on his social media on the links below.