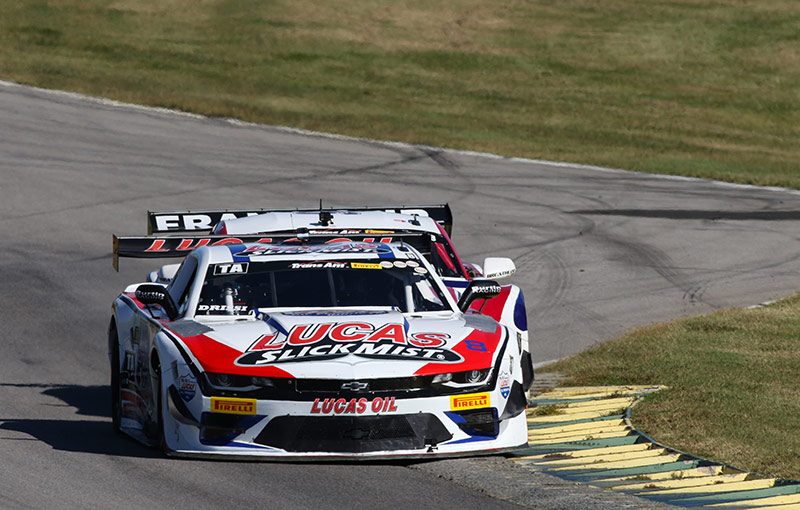 Alton, VA (September 23, 2021) – Lucas Oil SlickMist Champion driver, Tomy Drissi, suffered bad luck after retiring early as he watched the 2021 Trans Am Championship Presented by Pirelli slip away from pit lane at Virginia International Raceway. The veteran driver was a top contender for the championship throughout the entire season until the Chevy Camaro developed a vibration in the front of the car which forced Drissi to pit multiple times.

“The car was shaking itself apart and the guys did a great job trying to get me back out there but the front end wouldn’t stop shaking and we had to retire before someone got hurt or pieces started falling off. I’m happy for Chris Dyson for clinching the championship this weekend and I wish we would have been there at the end so we could have battled for the championship in Texas. But just look at the photos and live stream to see how close the racing is in this series.” Said Drissi “As always I can’t thank Lucas Oil SlickMist and the entire Burtin Racing crew for all the support and hard work. Everyone worked so hard this year and I know we will be going into next year in the best shape possible.”

Heading into Round 11 at CoTA, Drissi is now second in the points for the 2021 championship. You can follow Tomy Drissi and Lucas Oil SlickMist on November 7th by downloading the Trans Am Presented by Pirelli app in the Apple AppStore or Google Play Store or by following Tomy Drissi on his social media on the links below.