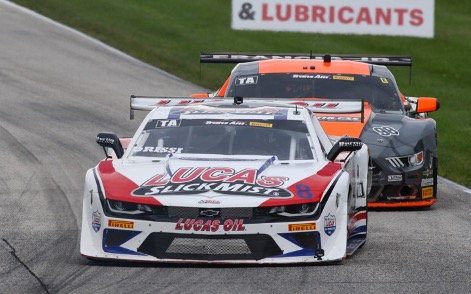 Plymouth, WI (August 10, 2020) – Trans Am Presented by Pirelli Former Champion, Tomy Drissi, does not disappoint when it comes to entertainment. The Burtin Racing/Lucas Oil SlickMist driver finished sixth at Road America after a last lap spin, knocking him from his second place starting position that he defended from Ernie Francis Jr. Drissi was still able to clock in the fastest lap of the race in the Lucas Oil SlickMist Chevy Camaro while hunting down Chris Dyson.

“It was a great race, the kind of race that drivers and fans look for. I wish we could have seen another podium and I feel bad for the team and everyone involved, but there are still a lot of races left this year to get more wins.” Drissi said after the race. “Everyone was great this weekend, Trans Am, Burtin Racing, Pirelli, ECR Engines and of course Lucas Oil SlickMist. The goal has not changed, and we are all up for the challenge.”

Coming out of Road America, Drissi is currently in second place for the championship and only 10 points away from the multi-champion Ernie Francis Jr.