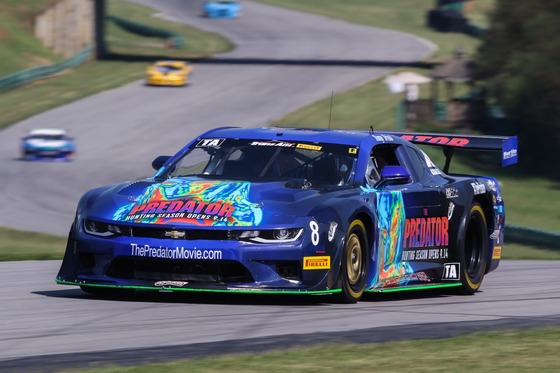 Watkins Glen winner and two-time Trans Am Champion Tomy Drissi put in a hard day at the office, driving his No. 8 Burtin Racing The Predator Camaro at VIR, Saturday.

Embroiled in a midfield battle for the entire race, Drissi slipped one place on the grid to eighth at the flag. Lacking the performance edge he had at the Glen, Drissi was nevertheless full of praise for his Burtin Racing partner and vowed to continue helping him win the title.

“We had a top five car this weekend,” said Tomy. Unfortunately, I rubbed someone trying to pass, cut a tire and had to come in.”

“The team did a great, fast job in getting me back out,” said Drissi. “But only had enough time to get back up to eighth place. Even though this was a pretty tough race for me, I’m so happy for Loshak.”

“We’ve won two races in a row,” noted Tomy. “I won at Watkins Glen and now Loshack has won here at VIR. Just spectacular. I’m going to do everything in my power to help him win this championship.”

“We didn’t finish the way we wanted to,” added Tomy. “We were missing a little bit of speed – sometimes it’s tough. I’m a little frustrated. We’re here to win, not drive around but as a team we won. Last weekend as a team we won. If we can win a couple more races I think we’re going to have a Champion on our hands.”

Thanks to all the fans at VIR and Tony Parella with all he is doing – this was such a great event this weekend with Trans Am and SVRA. Trans Am is the best racing in the world.

The Trans Am Series presented by Pirelli will return to action at Circuit of The Americas, Trans Am’s penultimate round, November 1-4 where Burtin Racing will be looking to extend their excellent run of form.