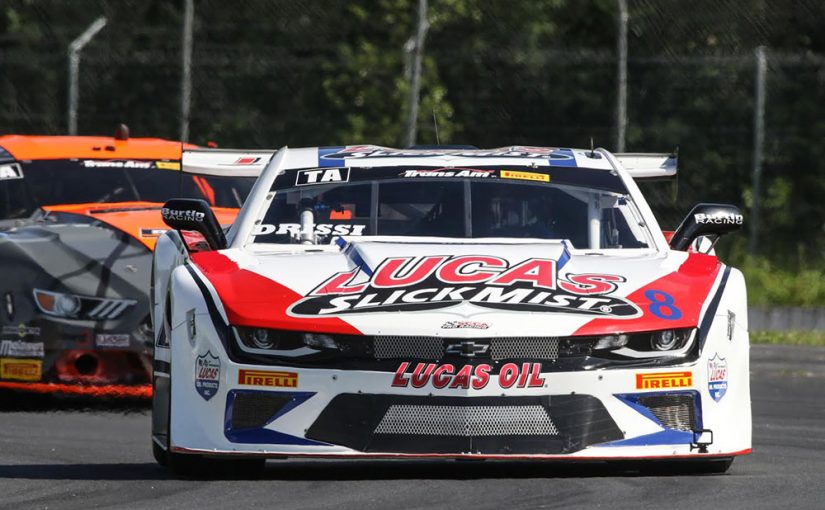 Brainerd, MN (July 12, 2020) – Tomy Drissi stormed into Brainerd International Raceway for The Ryan Companies Jed Copham Tribute Weekend and masterfully piloted the Lucas SlickMist adorned Camaro to the top of the All-Star podium. Victory did not come without its challenges. After starting the Burtin Racing Camaro on the front row, Drissi and Amy Ruman battled for second after the green flag dropped. Drissi regained the position and pulled away from Ruman a few laps before Ernie Francis Jr retired with technical difficulties – putting the 2009 Trans-Am Champion in first with a comfortable lead with more than half the race left.

“I was patient today,” said Drissi. “Burtin Racing gives me a lot of confidence. We would not be as fast without Lucas Oil Slick Mist. It’s great to be P1 at Brainerd. I am sorry that Ernie had the misfortune. It has been 10 years since I was here, and they have done a wonderful job, it looks amazing. It was like Jed (Copham) was riding along with me in the car. I finished second last time I was here, so it is great to be on top!”

“Amy is such a good competitor” Drissi said after the race, ”neither of us were going to give in to each other. You could tell she had a lot of motor coming out of the corners but I finally got her and went for Ernie. I was looking forward to catching up to him but unfortunately he had to pull off. Everything was great, the track was great, the fans were great. Burtin Racing set the car up great and that Lucas SlickMist Camaro has never looked better than it does in the winner’s circle. I can’t thank the all the guys at Lucas and Claudio (Burtin) and the Burtin team enough.”

Coming out of Brainerd, Drissi is currently in second place for the championship and only a handful of points away from the multi-champion Ernie Francis Jr.

About Lucas Slick Mist:
Lucas Oil Slick Mist is a polymer paint gloss intensifier, which can be used on other surfaces such as glass, chrome and vinyl decals. Use Slick Mist as a traditional wax, quick detail spray or spray it on your vehicle between rinsing and drying for the easiest polish job ever.

For media inquiries and booking opportunities, contact:Cezel at cezel@drissi.comAbout the Trans Am Series presented by Pirelli:
The Trans Am Series presented by Pirelli began igniting the passion of motorsports fans across the world in 1966 and has been home to some of the greatest names in road racing. Today, Trans Am continues to honor its legacy, while challenging the status quo in racing, through meaningful racing platforms and a driver-oriented focus. The Trans Am Series is operated by The Trans Am Race Company, LLC (TARC), and oversees the management and marketing of the Trans Am Series, presented by Pirelli. SCCA Pro Racing sanctions Trans Am events and provides operations services to the Series.2018 Champions include: Ernie Francis, Jr. (TA), Rafa Matos (TA2), Alline Cipriani (SGT) and Warren Dexter (GT).
For more on the Series visit www.gotransam.com, “like” Trans Am on Facebook at www.facebook.com/gotransam, or follow Trans Am on Twitter @gotransam
For media inquiries, contact:Amy Greenway at amy@sundaymanagement.comMatt Cleary at mcleary@gotransam.com