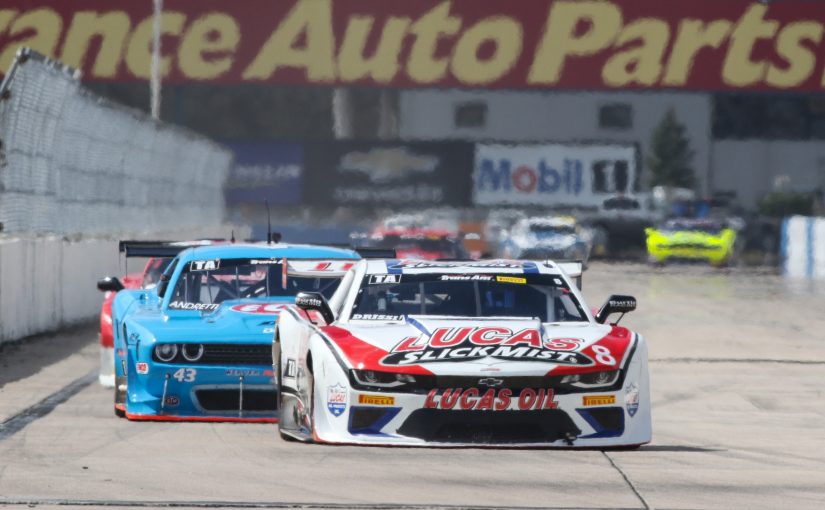 Sebring, FL (February 25, 2021) – Trans Am Presented by Pirelli Championship driver Tomy Drissi started off another year at Sebring International Raceway with Lucas Oil SlickMist and Burtin Racing. Starting the weekend off as a true Rockin-Moroccan by setting the fastest lap in the final practice and being one of only two drivers to break the sub-two minute time in qualifying, Drissi started the year off with a strong finish.

“It was a roller coaster of a weekend.” said Drissi. “We were strong in practice and got the fastest time and broke into the 1:59s in qualifying which only two Trans Am drivers have ever done. Starting on the front row was great for the Lucas Oil SlickMist Chevy Camaro. I had a great battle with Andretti, which let Ernie get a pretty good lead. I was able to run him down and take first. I dropped back to second again and pressured him for quite awhile. I made a mistake trying to pass for the lead again which made me lose some spots and I dropped to fourth. It’s frustrating to have the lead and watch it slip away. Congratulations to Dyson for the win. The Lucas Oil SlickMist Chevy Camaro was fast. It shows how strong we are this year and we’re going to race for wins and the 2021 championship. Team Burtin did such a good job and the car was fast. I’m excited about Burtin Racing’s home track (Road Atlanta) next month.”

Heading into round two at Road Atlanta, Drissi is one of the top contenders for the 2021 championship. You can follow Tomy Drissi and Lucas Oil SlickMist on March 28, 2021 by downloading the Trans Am Presented by Pirelli app in the Apple AppStore or Google Play Store or by following Tomy Drissi on his social media on the links below.

About Lucas Slick Mist:
Lucas Oil Slick Mist is a polymer paint gloss intensifier, which can be used on other surfaces such as glass, chrome and vinyl decals. Use Slick Mist as a traditional wax, quick detail spray or spray it on your vehicle between rinsing and drying for the easiest polish job ever.