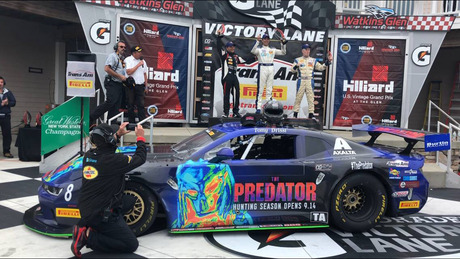 In a race that saw four different leaders, it was Tomy Drissi and the No. 8 The Predator Chevrolet Camaro who emerged with the Trans Am Series presented by Pirelli victory at Watkins Glen International.

It was a strategy that began at Road America… stay in the hunt, drive clean, then race for the podium. With the tight qualifying at the Glen, starting sixth was not a disadvantage.
Drissi would begin the 102-mile, 30-lap contest around Watkins Glen’s Grand Prix course in sixth position and begin his climb through the field, moving to fourth on the second lap then adopting a more patient strategy; a good start, stay clean and let the race come to you. With 10 laps remaining and nothing but the open track of Watkins Glen, drive for the win.

And that’s what he did. Driving the No. 8 Predator Camaro for Burtin Racing, Tomy Drissi executed the perfect strategy… and it paid off.

Pole sitter Boris Said, in the No. 21 Monster Energy/ Weaver Concepts Dodge Challenger, would retire due to wheel bearing, Ernie and Fix had trouble also.
“The start of the race was just crazy.” said Tomy. “I probably could have pressed my advantage, but I decided to lay back and play it slow—see what happens. I hate it for the guys that ended up having trouble, especially Boris; he was so fast.”
“But we were in the zone,” said Tomy. “From the crew to the car to the checkered flag…. we were simply in the zone. We made our way through the turn one calamity, and stated the fight to the front. We had our issues too when on lap 8 we broke a header. We lost at lease 30-40HP but are car handled so good that we could still post good times. What mattered was that last yellow…. everyone bunched up but it didn’t matter. We had the car… the handling and we were able to fight and stay just ahead of Loshak”.
But Drissi had to earn his win, holding off his hard-charging Burtin Racing teammate Lawrence Loshak, in the No. 2 Pennzoil/ ETE Reman Chevrolet Camaro, over the course of the final six laps.
“I saw Loshack making moves in those last 10 laps,” said Tomy. “….. with three and four laps to go it was 10/10ths, he was pushing hard… but he’s a true gentleman.. he raced me clean without taking any unnecessary risks. I was faster in some places, but he was faster in others. He could have shook me loose or gotten into my quarter panel, but he didn’t. There was respect there, and I owe him one. I want to see him get some wins coming up; he doesn’t need my help—he’s pretty quick. I’ll race with him any day.”
“Those last laps took forever,” said Tomy. I think that car made every noise I’ve ever heard. The laps around the Glen and pretty long anyway. The last two are really, really long when your looking for the checkered flag.”

“Obviously, I can’t thank the Burtin Racing crew enough,” Tomy added. “They put us right in the hunt and left the rest up to me. We’ve really developed a nice working relationship and it’s nice to know your crew is 100% behind you. Of course, having The Predator movie on board was great fun… it was great for the fans and especially great for all the kids visiting the race with Chris Dyson’s Cornell Upward Bound charity. We had a great time with them. My hats off to Trans Am, Watkins Glen and my family, Lacy and the kids, thank you all. We’re proud to be a part of it.”

You can follow select 2018 action of the Trans Am Series presented by Pirelli with the new Motor Trend On Demand app or on your web browser. Highlights of the recent Road America action can be seen on the CBS Sports network on September 16 at 2:00pm ET. The full recap of the Watkins Glen race is September 23 at 2:00pm ET.

About The Trans Am Series presented by Pirelli: