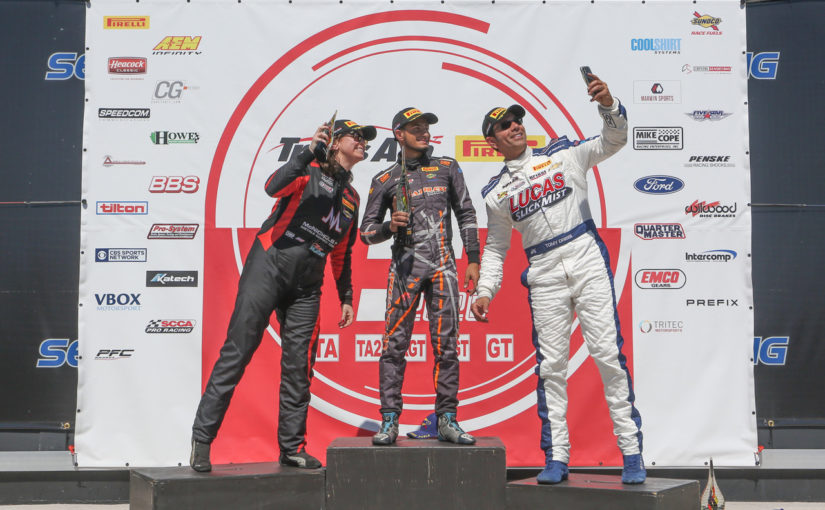 Drissi started the Lucas Oil Slick Mist Camaro as it gleamed in the Florida sunshine from the rear of the field, however, Drissi quickly charged up to the front of the pack winning him the Cool Shirt Cool Move Award of the race.

“We had little gremlins in qualifying yesterday and they came up again so we had to baby the car. We had a good battle with Andretti and with Dyson. We want to beat these guys fair and square and not because of mechanicals.” Drissi said from the podium.

Andretti and Dyson wouldn’t be immune to the gremlins that weekend. After a mishap in practice, Dyson and his crew would miss qualifying while they worked on the car only to see the Drissi/Dyson duo quickly work their way up into top positions during the race. Andretti battled his own gremlins during the race as his car fell from second place mid-race.

A full course caution gave Drissi the opportunity needed to challenge Ernie Francis Jr for the lead. “I thought we were going to have a good fight, but Ernie got a good restart and before I could get by him we went back to finish the race under yellow,” Drissi said when asked about the final laps of the race.

“They gave me such a good car,” Drissi said of Burtin Racing. “Those guys worked so hard. They stayed up and fixed that car from the handling to the mechanics.”

Sebring International Raceway is home to the season opener for Trans Am presented by Pirelli Championship race for 2020. The first race at this historic track was on New Year’s Eve of 1950 and was home to the first United States Formula 1 race, the United States Grand Prix. The track is located at the Sebring Regional Airport and has undergone many safety changes over the years, however, it maintains the history and character that makes it one of the greatest North American road racing courses.

Live coverage and replays of Round 1 of the 2020 Trans Am Series presented by Pirelli Championship at Sebring International Raceway is available during the race on the Trans Am Series App available in the Apple App Store and Google Play Store.