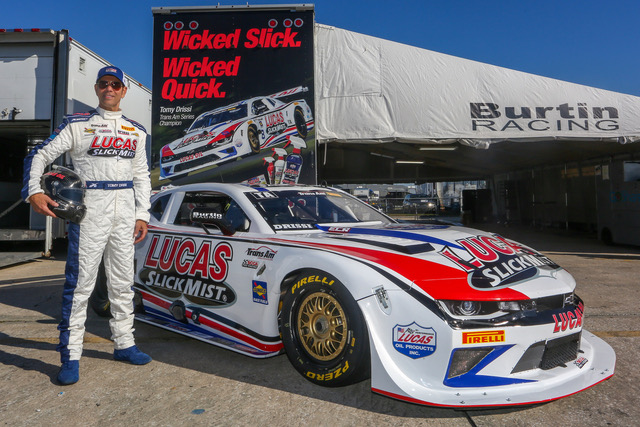 Sebring, FL (28 February, 2020) – Tomy “The Rockin Moroccan” Drissi and Lucas Oil’s Lucas Slick Mist are primed for the 2020 Trans Am Series presented by Pirelli Championship this weekend at Sebring International Raceway. Success at Sebring is nothing new to Drissi where he kicked off the 2019 season on the front row.

“Sebring is always one of my favorite tracks to be at. Not just because of the incredible fans and history here but Sebring also marks the start of the Trans Am season and we get to see all of the improvements and hard work that we put into the car over the break.” Drissi said off camera.

Success is not without its challenges for the former Trans Am Rookie of the Year and Champion. In 2019 Drissi was forced to take some time off due to injuries, however, he was quick to rebound and finished off the season strong.

“I’m glad to be back and I’m looking forward to a good year. We’ve been able to make a lot of improvements to the car and The Lucas Slick Mist Camaro is going to come out fighting.” Drissi said when asked about the 2020 Season. “I’m proud to be a part of the Lucas Oil family and to represent the Slick Mist product.”

Sebring International Raceway is home to the season opener for Trans Am presented by Pirelli Championship race for 2020. The first race at this historic track was on New Years Eve of 1950 and was home to the first United States Formula 1 race, the United States Grand Prix. The track is located at the Sebring Regional Airport and has undergone many safety changes over the years, however, it maintains the history and character that make it one of the greatest North American road racing courses.

Round 1 of the 2020 Trans Am Series presented by Pirelli Championship at Sebring International Raceway starts at 11:10am on Sunday March 1, 2020.

About Lucas Slick Mist:
Lucas Oil Slick Mist is a polymer paint gloss intensifier, which can be used on other surfaces such as glass, chrome and vinyl decals. Use Slick Mist as a traditional wax, quick detail spray or spray it on your vehicle between rinsing and drying for the easiest polish job ever.
Follow Lucas Oil on Social Media at:
Instagram: @LucasOilProducts / Facebook: @OfficialLucasOil / Twitter: @Lucas_Oil

Follow Tomy Drissi on Social Media at the folowing: