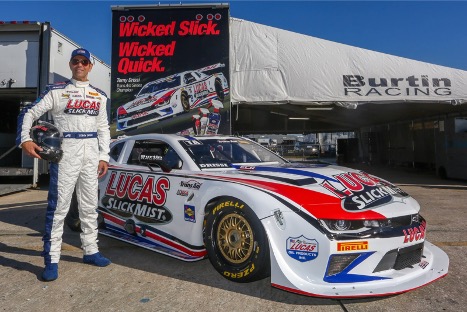 Brainerd, MN (July 8, 2020) – Tomy Drissi and Lucas Oil SlickMist are in full fighting force to take on the The Ryan Companies Jed Copham Tribute Weekend at Brainerd International Raceway for the next round of the Trans Am Presented by Pirelli Championship. The 2009 Trans Am Champion is currently second in points after a second place finish at the season opener at Sebring and an all-around tricky race at Mid-Ohio, the series’ first race after the Covid 19 hiatus.

“It’s going to be good to get to Brainerd and keep working away at these points and spend some time with everyone out there.”, Drissi said before arriving at the track, “They really have a great community around the track and it’s an honor to be racing the Lucas SlickMist Camaro for Lucas Oil and Burtin Racing and to pay tribute to Jed Copham.”

Drissi is referring to the Ryan Companies tribute to the late Jed Copham, Brainerd International Raceway owner who perished in a swimming accident in 2018 leaving behind his wife and two kids. “As a husband and father, myself, I can only imagine what they went through. It takes a lot of strength to carry on the way they do, I can only hope to properly honor Jed and them this weekend.” Drissi concluded.

You can follow the Lucas SlickMist Camaro and Tomy Drissi live by downloading the Trans Am Presented by Pirelli app in the Apple AppStore or Google Play Store. The feature race starts Sunday July 12 at 12:45 PM CDT.