Tomy Drissi and the No. 8 Predator Camaro Head to Watkins Glen for Round 8 of the 2018 Trans Am Championships presented by Pirelli 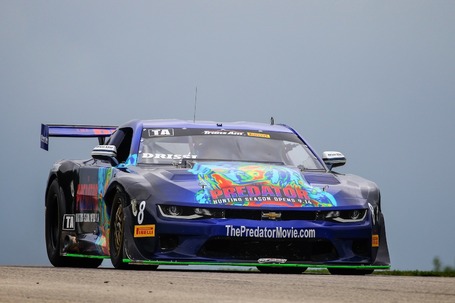 Heading to one of North America’s greatest historic tracks, Watkins Glen International in New York, Tomy Drissi is once again teamed with Burtin Racing and driving the No. 8 “The Predator” Camaro.

Tomy Drissi has already wrapped up the 2018 West Coast Trans Am Series presented by Pirelli Championship win and is sitting in second place for the Northern Cup. Motor issues kept Tomy from leaning on the Camaro as hard as he would have liked last week at Road America. Regardless, Tomy still pulled off a sixth place finish.

Drissi’s No. 8 Chevrolet Camaro will again be promoting the spectacular ‘The Predator’ movie livery. The car garnered much attention at Road America and will no doubt do the same at The Glenn.

“It’s been a couple of tough races,” noted Tomy. “We’ve struggle mechanically, but managed to keep The Predator Camaro in the hunt. I really have to hand it to the crew at Burtin Racing. Through all the adversity, they’ve maintained a no-quit attitude, kept their cool and stayed focused on the job at hand.”

“The good news is,” added Tomy, “we’re racing at The Glen. This is such a great race track. This track has it all. Elevation changes, lots of twisty bits and some long open runs. Burtin Racing had the win here last year and on my last visit running TransAm, I finished second and locked up the TransAm Championship. We’d very much like to back that up with a win for The Predator Camaro. Even in tough times we’ve been knocking at the podium door… so I’m confident we’ll get the job done!”

“It’s so beautiful, up here,” noted Tomy. “There’s so much racing history and the fans are incredibly knowledgeable. We’re paired with the SVRA historics this weekend, so it should be a great turnout.”

The highly competitive field of 17 cars will be lining up on the grid for in the prestigious TA class. The weekend gets underway with the first test session on Wednesday afternoon. Testing and practice will continue through Thursday. Qualifying is slated for Friday afternoon and the race will take the green flag at 11:00am ET on Saturday. The race will cover 30 laps of the Grand Prix Course at Watkins Glen, an iconic layout that includes the newly repaved ‘Boot’ section.

You can follow select 2018 action of the Trans Am Series presented by Pirelli with the new Motor Trend On Demand app or on your web browser. Highlights of the recent Road America action can be seen on the CBS Sports network on September 16 at 2:00pm ET. The full recap of the Watkins Glen race is September 23 at 2:00pm ET.

Opens September 14, 2018. From the outer reaches of space to the small-town streets of suburbia, the hunt comes home. The universe’s most lethal hunters are stronger, smarter and deadlier than ever before, having genetically upgraded themselves with DNA from other species. When a boy accidentally triggers their return to Earth, only a ragtag crew of ex-soldiers and a disgruntled science teacher can prevent the end of the human race.
About The Trans Am Series presented by Pirelli: