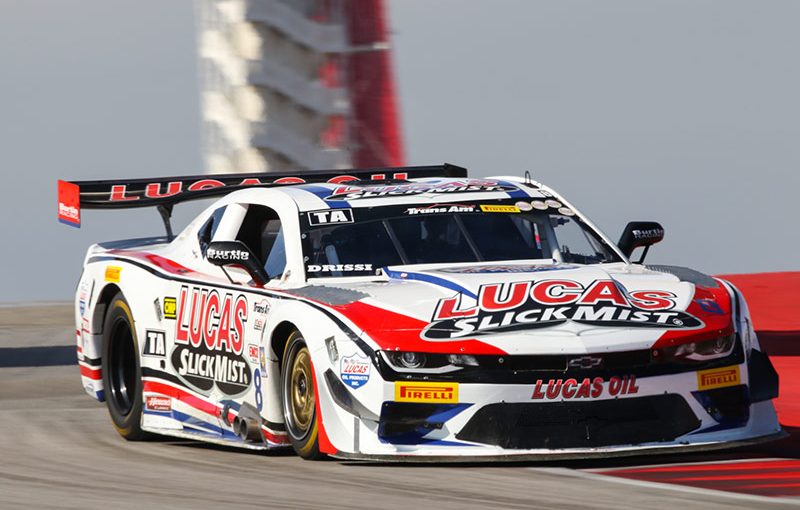 Austin, TX (November 5, 2021) – Lucas Oil SlickMist Champion driver, Tomy Drissi, starts off testing for the final round of the 2021 Trans Am Championship Presented by Pirelli at the Circuit of The Americas out front. With plenty of track time left in the weekend, Drissi plans to keep the Lucas SlickMist Camaro by Burtin Racing the car to beat as the season winds down. Drissi conceded the championship to Chris Dyson when mechanical issues forced him to retire the car early at VIR and going into CoTA, Drissi is comfortably leading Ernie Francis Jr.

“As much as I wish the top step in the championship was still in the running, we still haven’t fully secured the second place until the checkered flag on Sunday. We’ve always shown good speed here at CoTA but it’s bittersweet racing knowing the season is ending. One moment you’re excited to be racing hard for position and the next moment you realize it’s almost over. Even the best poetry couldn’t come close to describing how it feels.” Said Drissi about the race. “As always I can’t thank Lucas Oil SlickMist and the entire Burtin Racing crew for all the support and hard work this year.”

Heading into Round 11 at CoTA, Drissi is now second in the points for the 2021 championship. You can follow Tomy Drissi and Lucas Oil SlickMist on November 7th by downloading the Trans Am Presented by Pirelli app in the Apple AppStore or Google Play Store or by following Tomy Drissi on his social media on the links below.